Take My yoke upon you and learn of Me, for I am gentle (meek) and humble (lowly) in heart, and you will find rest (relief and ease and refreshment and recreation and blessed quiet) for your souls. Matthew 11:29

One thing I do know, anything I place in His hands is safe. 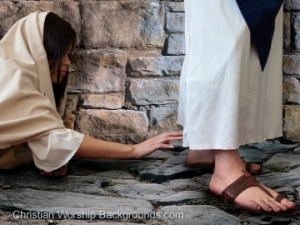 She heard He was in town, the One who could finally heal her. She tried everything to find relief and nothing worked. Twelve years is an awful long time to endure the humiliation of her affliction. She wanted her life back! She was tired of being alone and shunned everywhere she went. It was a lonely and painful existence.

She pulled her scarf over her head, pulled her bangs down to cover her face, kept her gaze down to not make eye contact with anyone, and she went looking for Him.

“How am I going to get to Him?” She wondered. She frantically pushed her way through the crowd. Another thought entered her mind…”What if He rejects me like everyone else?”

She had to see Him. She knew He was her only answer. He was her salvation and she could let nothing or no one get in her way; not even her own fear.

“If I can just touch the hem of His garment it will be enough.”

“Who touched Me?” She heard His voice ask. He stopped, the crowd stopped with Him, confused that He should ask such a question, after all everyone was touching Him, pressing Him.

One of His disciples said to Him, “Everyone is touching you.”

“This touch was different.” he said, looking around the crowd. “I felt power leave Me with this touch, this was a touch of faith.”

The woman knowing she had been found out, could not deny it was her. Trembling she fell to His feet. “It was me, I touched You, I know You are the only One who can heal me. When I touched You I was healed.”

Kneeling down, He took her by the hands, lifted her, looked her in the eyes and gently spoke, “My daughter, your faith has healed you, go in peace.”

Wow! The whole crowd pressing in on Him and He felt that one soft purposeful touch.

What are you facing today? What is your infirmity? No matter it is sickness of body, mind, or soul…. if you can just press through the mob of fear, distraction, lies, wrong relationships, whatever it is that is keeping you from being well and in peace… let it go and get to Jesus.

When we come to the end of ourselves we will find Him. Touch Him with faith and He will kneel down and lift you up and He will say to you…”My daughter/son, your faith in Me has made you well.

Luke 8:43-48 And a woman who had suffered from a flow of blood for twelve years and had spent all her living upon physicians, and could not be healed by anyone, Came up behind Him and touched the fringe of His garment, and immediately her flow of blood ceased. And Jesus said, Who is it who touched Me? When all were denying it, Peter and those who were with him said, Master, the multitudes surround You and press You on every side! But Jesus said, Someone did touch Me; for I perceived that [healing] power has gone forth from Me. And when the woman saw that she had not escaped notice, she came up trembling, and, falling down before Him, she declared in the presence of all the people for what reason she had touched Him and how she had been instantly cured. And He said to her, Daughter, your faith (your confidence and trust in Me) has made you well! Go (enter) into peace (]untroubled, undisturbed well-being). 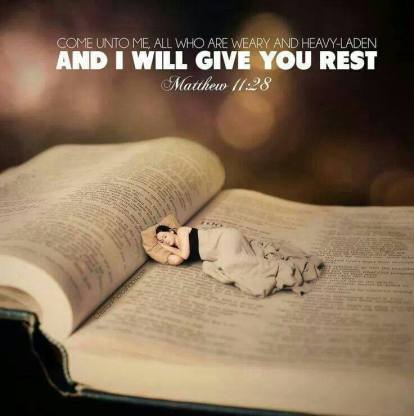 Yes, I do. I sleep with the Word cradled against my chest every night. To me… it is like hugging Jesus while I fall asleep.

I know He watches over me while I sleep, Psalm 139 says He knows everything about me and I cannot escape His presence. This is comforting to me, to know His eyes never leave me.

So holding my Bible close to me while I sleep, it is like somehow, tangibly hugging Him.

O Lord, you have searched me [thoroughly] and have known me. You know my downsitting and my uprising; You understand my thought afar off. You sift and search out my path and my lying down, and You are acquainted with all my ways. For there is not a word in my tongue [still unuttered], but, behold, O Lord, You know it altogether. You have beset me and shut me in—behind and before, and You have laid Your hand upon me. Your [infinite] knowledge is too wonderful for me; it is high above me, I cannot reach it. Where could I go from Your Spirit? Or where could I flee from Your presence? If I ascend up into heaven, You are there; if I make my bed in Sheol  (the place of the dead), behold, You are there. If I take the wings of the morning or dwell in the uttermost parts of the sea, Even there shall Your hand lead me, and Your right hand shall hold me.If I say, Surely the darkness shall cover me and the night shall be [the only] light about me, Even the darkness hides nothing from You, but the night shines as the day; the darkness and the light are both alike to You. For You did form my inward parts; You did knit me together in my mother’s womb. I will confess and praise You for You are fearful and wonderful and for the awful wonder of my birth! Wonderful are Your works, and that my inner self knows right well. My frame was not hidden from You when I was being formed in secret [and] intricately and curiously wrought [as if embroidered with various colors] in the depths of the earth [a region of darkness and mystery]. Your eyes saw my unformed substance, and in Your book all the days [of my life] were written before ever they took shape, when as yet there was none of them. How precious and weighty also are Your thoughts to me, O God! How vast is the sum of them! If I could count them, they would be more in number than the sand. When I awoke, [could I count to the end] I would still be with You.